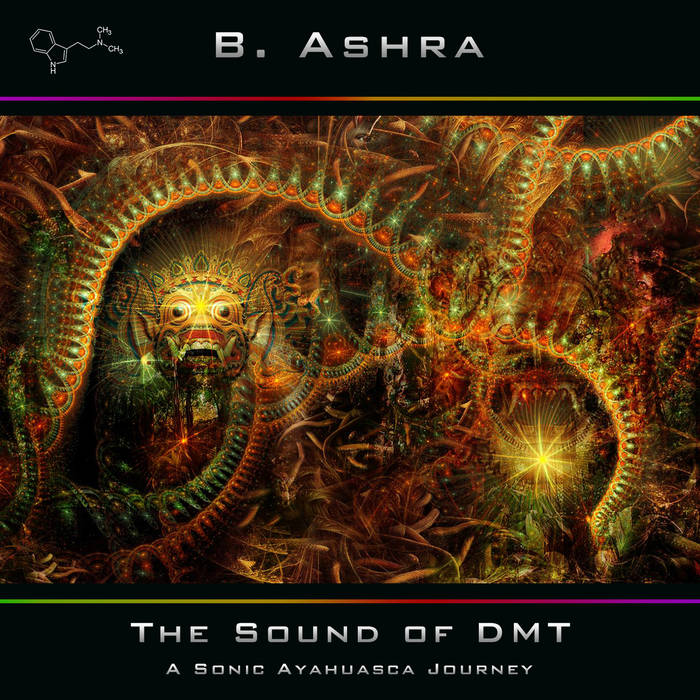 B. Ashra kidnapped us with his new album The Sound Of DMT into a sonic, shamanic magic world. Field recordings mixed with shamanic chants and ritual sounds, traditional instruments meet synthesizer drones and glitches, a sonic ayahuasca journey.

This album is tuned to the DMT molecule according to calculations by Hans Cousto. DMT is part of the Ayahuasca drink. More detailed explanations on this topic are given below.

Comes exclusive for bandcamp as 24 bit files included the Complete Mix as one file 62 minutes 16 bit.

Because some players take pauses between the tracks, but it's actually a 62 minute mix without pauses, bandcamp offers the entire mix exclusively in a file as a bonus track so that you can enjoy the album without interruptions.

We recommend audio players such as the Vox, Tidal, Windows Media Player or similar, which do not pause between the tracks than you can enjoy the full 24 bit journey.

Because bandcamp only accepts audio files up to 600 MB, the "Complete Mix" is unfortunately only available as a 16 bit file, sorry for that. At bandcamp, however, the individual tracks are all 24 bit audio files.

We recommend audio players such as the Vox, Tidal, Windows Media Player or similar, which do not pause between the tracks than you can enjoy the full 24 bit journey.

In order to achieve the best effect of the molecular setting, a good stereo image is recommended; headphones would be ideal.

The DMT molecule has 8 different main spectra. So 8 different frequencies are played at the same time at 8 different speeds each so that an accurate acoustic image of the molecule is created. On the album "The Sound Of DMT" you can hear this event as a marimba chime which appears repeatedly in the album.

N, N-Dimethyltryptamine, DMT for short, is a hallucinogenic tryptamine alkaloid. It is used, among other things, as a psychedelic or entheogen by being smoked, snorted or injected. Oral ingestion (e.g. as Ayahuasca) can only have an effect if MAOH inhibitors have been taken simultaneously or beforehand, as DMT is broken down very quickly by the body's own enzyme monoamine oxidase. DMT occurs in some plants and in the skin gland secretions of the Aga toad and is also an endogenous substance in humans and animals.

Ayahuasca is a drink (DMT and MAOH inhibitor) that is traditionally taken in South America. Consumption can lead to near-death experiences. Markus Berger describes the effect in his book „DMT“ more as dream-like facets of reality and calls it the "Alice in Wonderland phenomenon". The "jungle cinema" is very colorful, magical and mysterious. It is very important that the intake is only directed in traditional rituals by trained shamans. Taking it alone or outside the protection of an initiate is not recommended.

Special thanks to: Kajuyali Tsamani, Hans Cousto and Markus Berger for inspiration, Paulo Jales for the wonderful cover picture and Fong Ponto for the flute in track 4.